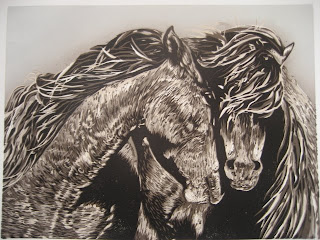 do you believe in telepathy?
I have been experiencing little telepathic occurrences a lot lately with my husband, more or so, since a few years ago.
it is not that of a big thing or anything...
they are something like,,,,
he says about something I was just thinking about.
and vice versa, I know what exactly he is going to say next.
or, on the same day, we wear clothes that are in the same color theme.
for example, just the other night...
my husband was going to go out to a pub to watch one of the Stanley cup games with his friend.
I can't go because, in BC, it is not allowed to bring children to a pub with you.
so, he was asking me if he could go out.
(I wouldn't say NO, but he was being nice to 'ask')
I thought in my mind,
[hmmmm, I should ask him to bring me a slice of chocolate cake from the pub(they have good deserts!)]
then, a second later, he was like
"I will get you a piece of chocolate cake! that should make it up to you."
also, my friend was telling me,
her husband can guess what the dinner is that night.

I know it's silly and insignificant.
but makes me wonder why these things happen.


is it really telepathy carrying a person's thoughts to another?
and does that prove those two people are meant to be together?
or
it is nothing to do with telepathy.
but it is just because you know what the other person's behavior patterns are like?
you of course know, or at least expect, what they do/react next after spending some time together.

have you ever experienced anything like this?
and what do you think why these things happen?

Sure I've experienced this. Although my mind tells me that it happens because you are used to each other.
It's definitely more romantic to think with the "heart."
ラブラブ♪

>あかずきんちゃん
thaht's true... there is a big part of me who wants romanticize things. maybe it's a girl thing?
I guess I still want & wish our relationship to be a romantic one even after being together for so long...

Or it could be a totally scientific thing. Something about brain wave patterns becoming in tune when you open yourself up to someone? Of course if you are a couple and sleep in the same bed, your physical heads are close together so on a subconsious level your heads might start using the same 'frequency'? That's my theory anyway; a combination of science and love ;o)

>karin
hm
taht is an interesting interpretation! and it is probably true that there is something scientific about it.
great theory and thank you for your imput :)!

::HARUNA::
just an ordinary girl who's always daydreaming about fabric, beads, paper & stamps... and of course, clothes and shoes!!!

you can find me here